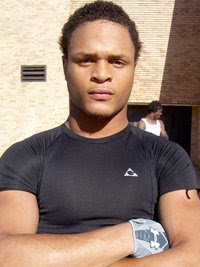 The little noticed Junior World Championship of Football has started over the weekend. Team USA, featuring future South Carolina Gamecock Chris Payne, raced out to a 37-0 halftime lead and crushed France 78-0. Payne, who went to Columbia High and will prep at Fork Union in the fall, led the defense with 8 tackles, including a sack, and a punt return for 11 yards.

How dominating was the game? Even more dominating than the 78-0 score sounds, if that's possible. France gained a total of 7 yards ... for the game. The USA averaged 10 per play en route to amassing 610 total yards. Team France ran 47 plays. That comes out to 0.1489 yards per play or just over 5 inches. At the rate the French were piling up yards they would have to run 671 plays to go the length of the field. Based on this weekend's game that would take them, roughly, 14.3 games, longer than most leagues' seasons.

The Americans are back in action Wednesday 7 pm against Mexico, 41-0 winners over Sweden.
-Cleveland Plain Dealer Recap
-The Sporting Blog

-Roster
-Webcast of the game, here
-Photo from Rivals
Posted by General Malaise at 8:56 PM

Email ThisBlogThis!Share to TwitterShare to FacebookShare to Pinterest
Labels: other stuff

so good to see the general getting his pen back out...