Bowden should be fired... 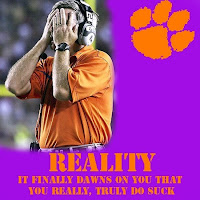 If klempson does not win the ACC next year then Tommy Bowden should be fired.

The Clemson University football team is ranked No. 10 nationally in Athlon Sports preseason Top 25. Athlon publishes an annual college football magazine that will be released Tuesday. Tigers quarterback Cullen Harper is on the cover of the Atlantic Coast regional edition.

"This could be the most talented Clemson team of the Tommy Bowden era," said Athlon Sports senior editor Mitch Light in a news release. "There are some issues on the offensive line, but there is tremendous talent at other key positions, most notably at running back. The defense, which was outstanding last year, should be a strength once again. The goals at Clemson are very high this year, and they should be. This is a very, very good team."

I hope that klempson fails like they always do...we hear this kind of talk from their camp and supporters every year (or at least since 1981). But every year they find some way to suck. LOHD touched on this HERE and HERE

I will admit that the ACC championship is tee'd up for them in 08 and that is why I say if they do not win it in 08 then Tommy needs to be given the pink slip. The ACC is weak in 08 and their ACC schedule is weak. They do have talent....i hate to say it....they have a good offense with weapons both in the backfield and at WR. The weak point on offense is the offensive line. Then on defense they suck at LB coming into fall 08 but other than that they are looking good on D.

ESPN has them ranked #7 going into the new season - here - so will this be the year? I say no b/c Tommy plays not to lose instead of to win....that has costed him so many times. Tommy will find a way to lose to a lesser opponent...that is what he is known for!

Thoughts?
Posted by Flounder at 4:36 PM