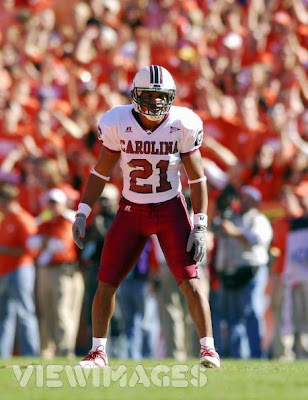 Emanuel Cook, who had been suspended from the University for an incident allegedly involving a gun, has been reinstated as a student at the university.

While he was suspended Cook was hospitalized with appendicitis and had to have his appendix removed. It may still be another two weeks until he can rejoin the football team, as he recovers from the surgery.

Following his reinstatement, Cook issued the following statement through his attorney, link:

"I have been reinstated as a student at the University of South Carolina. I appreciate the fair and expeditious handling of this matter by the University and the Office of Judicial Affairs. I understand the seriousness of the charges made against me and believe the actions taken by the University were reasonable and appropriate in this situation. I want to apologize to the entire University community, the football team and staff, and my family and friends for the negative attention which my actions may have brought.

I am excited to continue my educational pursuits and assure you I will have a positive impact on the University in the future. I would like to thank you for your support during this difficult period in my life. I also want everyone to know that I am on my way to a full and speedy recovery from my appendectomy which was performed on Sunday."

Posted by General Malaise at 9:17 PM